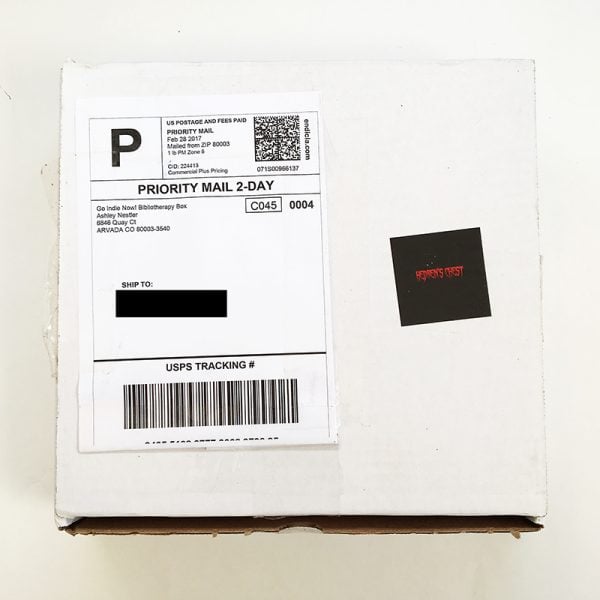 Hedren’s Chest is a bi-monthly book subscription service that sends you 1-2 literary horror reads along with a Hedren’s Chest zine, and 1-3 horror accessories to show off your love for horror!

Disclaimer: The box we are reviewing is base on their old price which was $29.99/bi-monthly. The number of contents in future boxes will reflect off the new price.

This is the second box from Hedren’s Chest, and I couldn’t be any more thrilled! I loved their first box, so I’m excited to see what they have to offer next! April/May’s theme is Women of Horror! 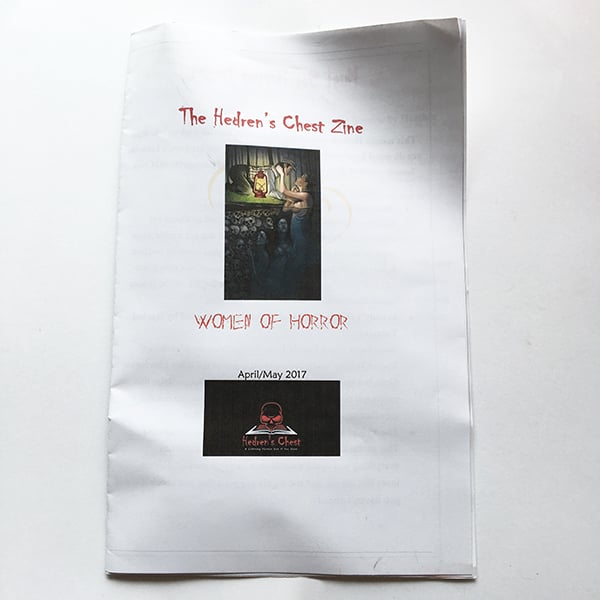 Hedren’s Chest includes a zine in every box which contains the product list and recommendations for horror novels and movies. Since the theme is all about the women in horror, Hedren’s list is base on female authors and directors! 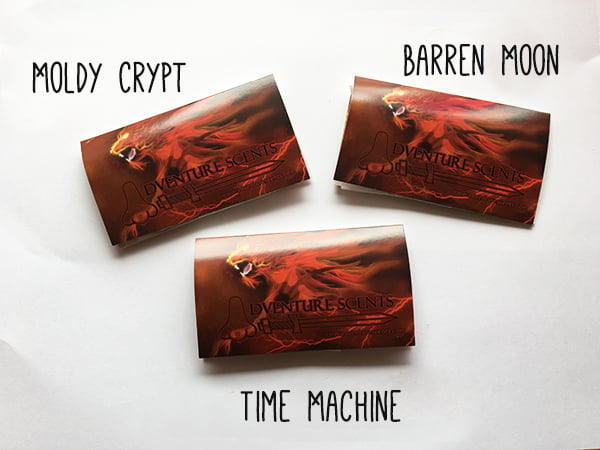 The box was overpowering with scents! We received three scent packs from Adventure Scents, and it contains Moldy Crypt, Barren Moon, and Time Machine. Individually, the scents are unique but combined them together, and it is a buffet of aromas. The scents enhance your reading experience, but I’m looking forward to using it for my Dungeons and Dragons night! 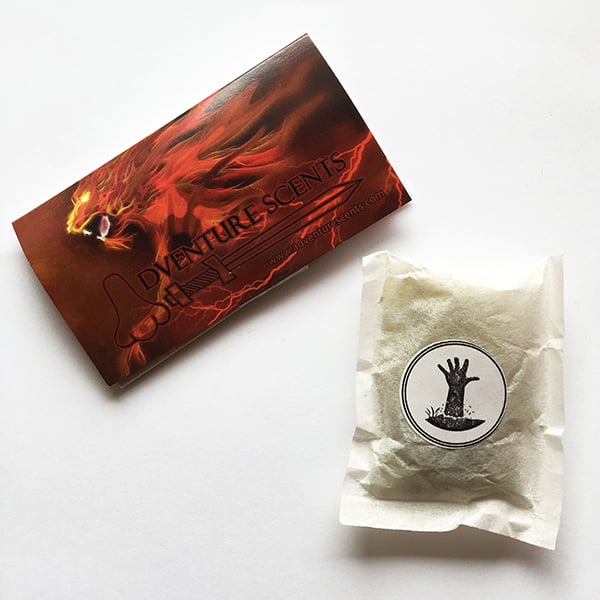 The first scent is Moldy Crypt. I had experienced this fragrance before when I was subscribed to Go Indie Now (it is now called Literary Vacation Club and is the same owner of Hedren’s Chest). It was hard to determine what the fragrance was and I feel like there is a hint of clove. According to the website, the key scents are mold, dirt, and decay. I know that people either love or hate the smell but I’m one of the odd few who likes it. 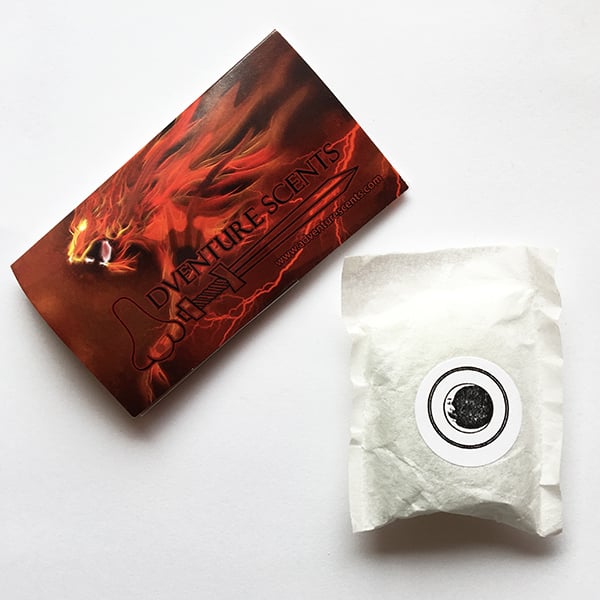 The next scent is Barren Moon. It is not as strong compared to Moldy Crypt, and it leaves a hint of freshness to it. I enjoy this scent more than Moldy Crypt since it’s not too overwhelming. The key scents are Chalky Dust and Bitter Loneliness. Although, I imagine loneliness smells something more like this: 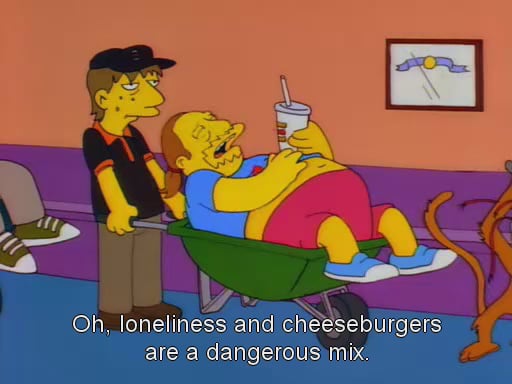 I’m only kidding! I have an odd sense of humor. 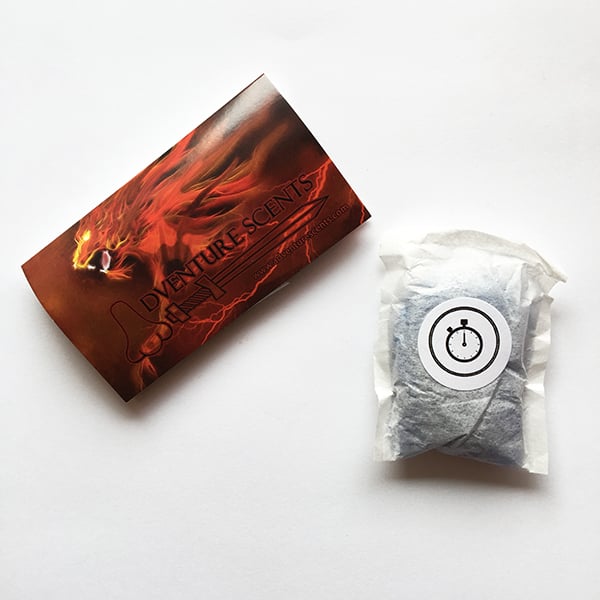 The last scent pack is Time Machine. I feel like I’ve experienced this one as well in the Go Indie Now box. It smells more water-like which makes sense since the key scent is mud and rain. I enjoy this scent as much as Barren Moon, maybe a tiny bit more! 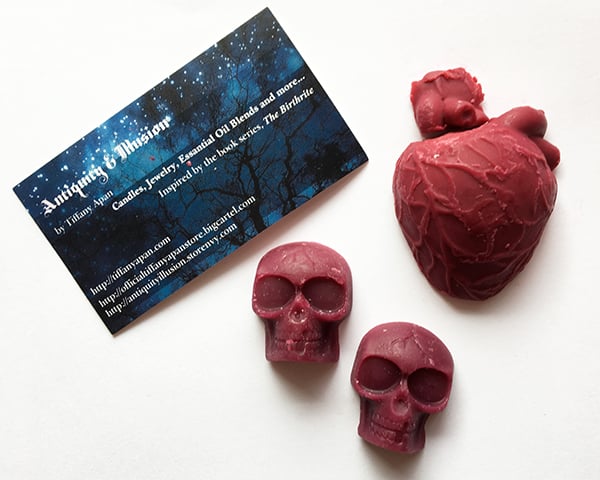 We also received another scent item which is Elvira-inspired wax melt by Antiquity and Illusion. I love the fragrance! It reminds me of a Lush item, perhaps a bubble bar I’ve tried many moons ago. It is the same vendor in the previous Literary Vacation Club box but out of all the wax melts that I’ve experienced in the past from them, this one is my favorite! 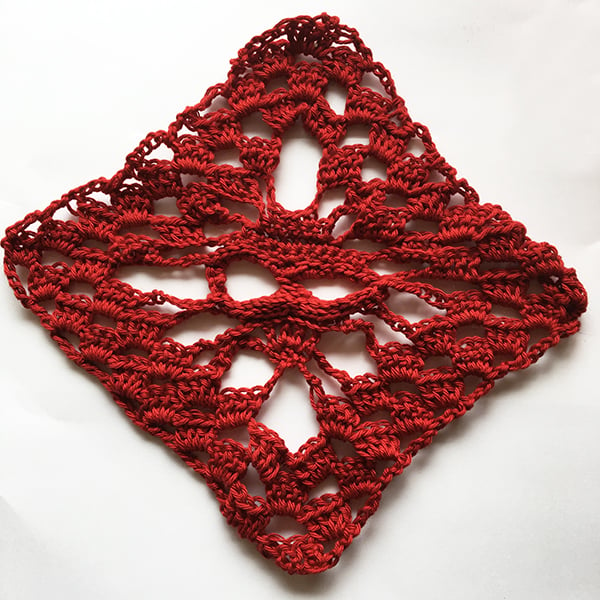 The next item is a crocheted washcloth inspired by The Velvet Vampire, made by Hedren’s Chest. I have never seen the movie before, but the main character influenced the item. I’m always afraid of using handmade washcloths because I know how much work goes into it. So instead, I will hang it on the wall. 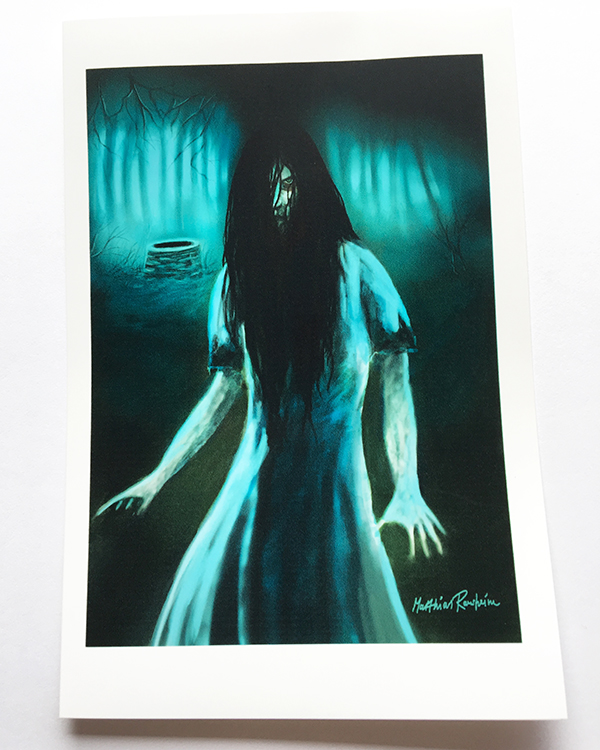 We received an art print of Samara from The Ring by Matthias Ransheim. I’m not a huge fan of The Ring, but I enjoyed the Japanese version of the movie. The details of the artwork are creepy which I love! My boyfriend was creeped out by the artwork, which is funny because we both share our love for horror! 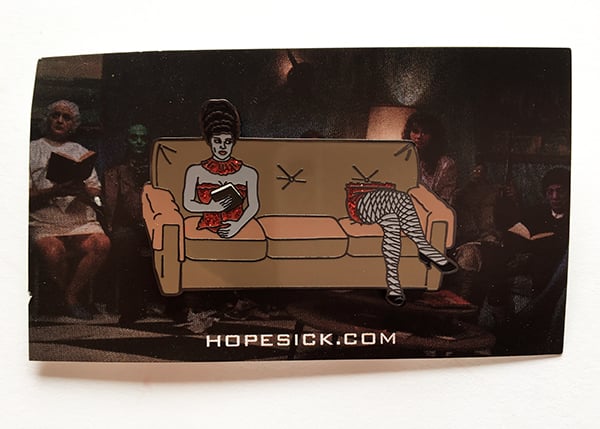 The last item before the book reveals, a Couch Lady pin by Hopesick. If you’re unfamiliar with this movie, then you must be living under a rock! I’ve been collecting enamel pins lately and even begin designing a few myself, so I was happy that they include one in this month’s box!

Finally, the book reveal! We received two book series (soon-to-be a trilogy!), Waking the Merrow and Hunting the Merrow, written by Heather Rigney. I am in love with the cover design of the two books, so I’m already impressed! It also includes two signed bookplates and a bookmark! 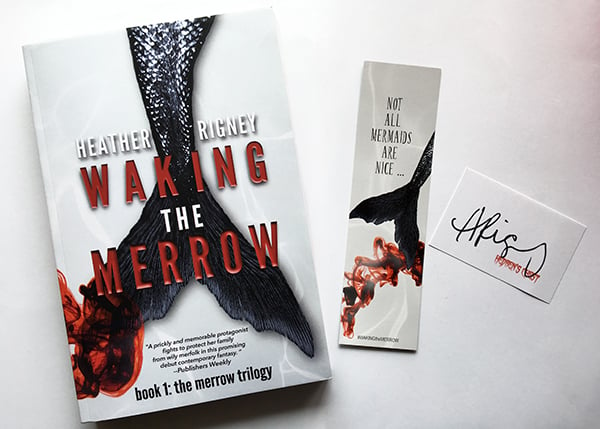 “In 1772, angry Rhode Island colonists set fire to a British ship, sparking the American Revolution. Taxation without representation was a motivator. So was the vengeful, man-eating mermaid who had it out for the commanding officer.

That was then. This is now.

Mermaids, or merrow, still hunt in Narragansett Bay, but these days they keep a lower profile. At night, centuries-old Nomia seduces smutty frat boys, lures them into icy waters, and feeds them to her voracious kin. By day, she and her half-breed daughter attempt to blend in at the coastal Village Playground. But Nomia slips up. She makes a friend. Then she makes that friend disappear, and someone notices.

Thirty-something Evie McFagan just wants to make it through working motherhood. But she’s a blistering stew of issues–snarky alcoholic and a friendless funeral director who just witnessed Nomia dismembering a guy at the nearby yacht club. When Evie believes a mermaid stole her baby, who will help? The merrow of Ireland? Or maybe anti-hero Evie will surprise everyone, including herself, and summon the strength to save her own family.

Intertwining the stories of two primordial families with the colonial history of Narragansett Bay, Waking the Merrow is a dark historical fantasy.” 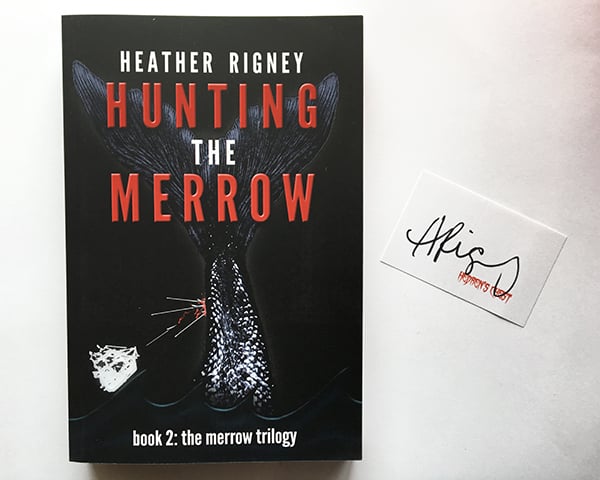 “Functioning alcoholic Evie McFagan thought her family was safe. She was wrong. Forced to choose between her estranged brother, Richard, and the family she created, Evie embarks on a dangerous journey with an unlikely ally—Nomia, the same aqua-maniac who almost killed her three years prior. But how can she trust a bloodthirsty merrow?

Not all mermaids start out evil. Some learn how. Nomia’s dark world turned into a living nightmare the moment her sister Nix disappeared. As Nomia reflects on her twisted past and turbulent family bonds, she’s forced to make amends with the antihero who destroyed her once-violent and depraved life. If she wants to save the merrow who raised her, Nomia needs to tuck tail and team up with her arch nemesis, Evie McFagan. As the clock ticks, Nomia and Evie must learn to be frenemies if they want to see their siblings alive.” 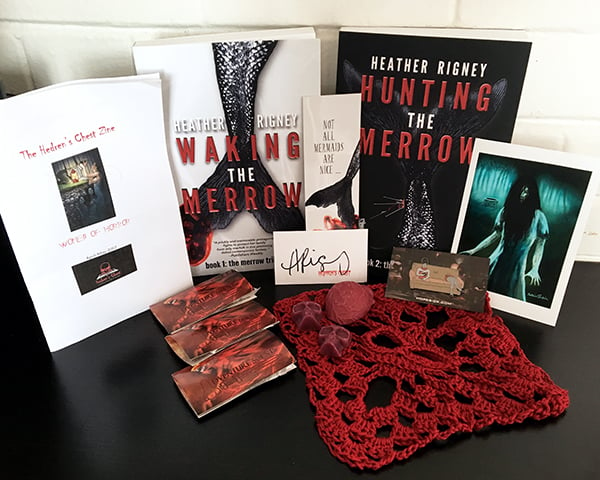 Final Thoughts: The Women of Horror theme is a vast improvement since their debut box! It is hands down my favorite one so far, and my favorite item was the Couch Lady Pin. I hope Hedren’s Chest continues to support more artists in the future (It is what I love most about this subscription) and I am looking forward to their June/July’s box, which is Creepy Carnival!

*NOTE: The Box Reviewers paid for this box.*