Nowadays, people call their cats names like Luna, Bella, Lily, Kitty, and Sophie, among others. Even 100 to 150 years ago, people gave their cats lovely names. However, one person was different – H.P. Lovecraft.

H.P. Lovecraft is a celebrated yet controversial figure in American history. He – and his family – acquired a cat in the early 1900s and gave it one of the most infamous cat names ever.

What was the name of the cat? And why would he pick such a name? You’ll find out all about it and more in this post. First, let’s introduce the man.

Who Was H.P. Lovecraft? 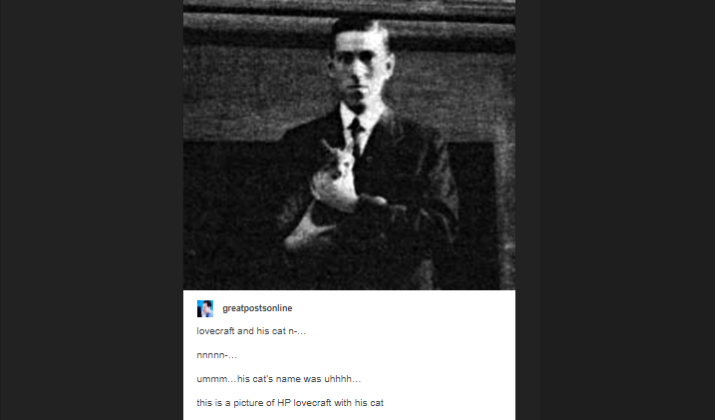 Howard Phillips Lovecraft was born on the 20th of August, 1890. He was an American author who wrote fiction, horror, fantasy, and, notably, weird novels and short stories.

Lovecraft wasn’t so famous as a writer when he was alive. His fame shot up after his death, and he’s currently one of history’s most widely read and influential fictional authors.

H.P. Lovecraft grew up in New England, in the Northeastern United States. His voyage into fictional writing began in 1913 when he wrote a criticizing letter to a popular 1900s pulp magazine.

In 1924, he moved to New York after marrying Sonia Greene; the marriage ended two years later. During this time, Lovecraft was a regular fiction writer, with many of his stories published in different pulp magazines.

Lovecraft developed the literary philosophy known as cosmicism. He was the pivot of the “Lovecraft Circle” group of writers, and with their help, he came into contact with Weird Tales. Weird Tales published most of Lovecraft’s works.

H.P. Lovecraft died from intestinal cancer on the 15th of March, 1937, aged 46. Scholars took an interest in his work and personal life in the early 1970s. Lovecraft is still studied today, and this study is known as “Lovecraft studies.”

What Was H.P. Lovecraft’s Cat’s Name? 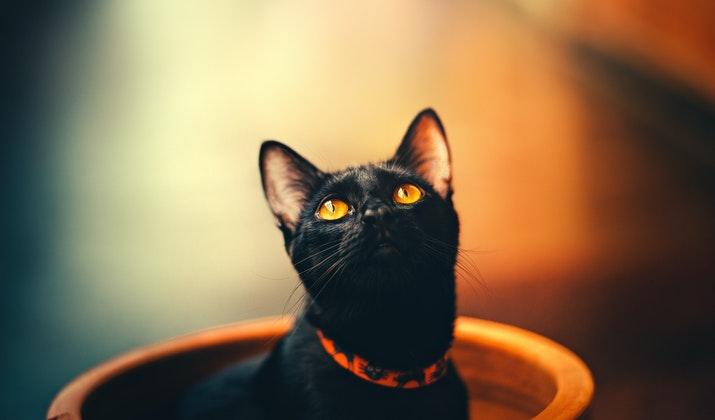 Image by Helena Lopes via Pexels

One of the reasons why people consider Lovecraft a controversial figure is because of his cat’s name. His cat’s name was “Nigger” or “Nigger man.”

Notably, his family acquired the cat as a kitten, and it’s unsure who gave it the name since he was just nine years old. However, Lovecraft was immensely fond of the cat and was despondent when it disappeared in 1904.

He was fond of the cat – and the name – so much that he eternalized it in his “The Rats in the Walls” short story. The short story was published in 1923 when Lovecraft was 33.

Having a cat with an N-word name and referencing it in one of his most widespread works portrayed H.P. Lovecraft as a racist.

With more efforts to curb racism in recent years, most publishers have switched the N-word name for a more lenient one, like “Blackie” and “Black Tom.”

Some use the name “Bolton Blackie,” referencing the town of Bolton in Worcester in the New England region where Lovecraft grew up. Bolton Blackie is also the name of a fictional character created by author Jack Boyle in 1914.

Why Did H.P. Lovecraft Name His Cat That?

H.P. Lovecraft’s cat had black fur, which was why it had an N-word name. As mentioned earlier, Lovecraft was a racist.

It isn’t surprising since he grew up during the Segregation Era in the United States, which lasted from 1900 to 1939. At the time, the N-word was in regular and casual use for many places and objects.

In his 1937 book “A Gent from Bear Creek,” Howard described a blowgun as a “nigger-shooter,” while Christine titled her 1939 novel “Ten Little Niggers.”

Some scholars argue that H.P. Lovecraft didn’t give the cat its name since he was only nine years old when it was acquired. Nevertheless, they agree that whoever gave the cat the name was a racist.

Even if Lovecraft didn’t name the cat, using the name in his novel portrays his approval. It was the name of Delapore’s cat – Delapore is the protagonist in H.P. Lovecraft’s short story, The Rats in the Walls. He also referred to the cat’s name many times in his letters.

What Is “The Cats of Ulthar” About?

The Cats of Ulthar is one of H.P. Lovecraft’s most famous short stories, and it affirms his love for cats. However, it’s not the book where the author mentioned the name of his childhood cat, although the cat in the novel had black fur.

The story centers on a town, Ulthar, and events that led to a law forbidding the killing of cats. In Ulthar was an aged couple that took pleasure in killing the cats of the locals. An orphan boy, Menses, loses his kitten while traveling through the town with other wanderers.

Menses learns of the couple’s cruel treatment of cats and causes the local cats to attack the couple in their house, killing them. Consequently, the lawmakers of Ulthar enacted a law prohibiting the killing of cats.

According to H.P. Lovecraft, the Cats of Ulthar was his personal favorite. Also, he acknowledged that the Anglo-Irish author Lord Dunsany was his significant influence. Lovecraft referenced the story in his other famous works, including The Dream-Quest of Unknown Kadath and The Other Gods.

What Is “The Rats in the Walls” About?

H.P Lovecraft published “The Rats in the Walls” in 1924. It’s the infamous book where he referenced his childhood cat by its N-word name.

He mentioned that his household included seven servants and nine cats, and that his oldest cat, “Nigger-Man”, was seven years old.

The above is the first mention of the N-word name in the short story, and it appears nineteen times in total. In the 1950s, Zest Magazine reprinted the short story and changed the cat’s name to “Black Tom.”

The book tells the story of Delapore, an American with English ancestry. After losing his son in the First World War, Delapore decided to move back to his ancestral estate in England. He owned a cat – the cat.

He successfully restored the estate from its dilapidated state. However, he and his cat were frequently disturbed by the sounds of rats behind the estate’s walls.

Following investigations, he discovers an underground city of “human cattle” that his family maintained for feeding purposes. They were cannibals.

Delapore’s direct ancestor slaughtered the entire family to end the tradition and fled to America. The remaining “human cattle” became food for the city rats.

Delapore went into the underground city with Norrys, his late son’s friend. Out of anger, he attacks Norrys and starts eating him. He was ultimately incarcerated in a mental institution.

While under investigation for Norrys’ death, Delapore refuses to admit his guilt. He insists he’s innocent and that the rats in the walls were to blame.

What Was H.P. Lovecraft’s Best Work? 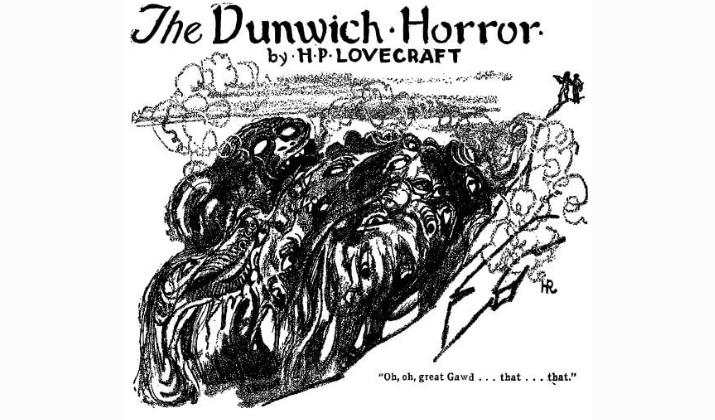 According to most scholars, H.P. Lovecraft’s best and most influential work is “The Call of Cthulhu.” It was the basis for some of his subsequent works, especially the “Great Old Ones” group that appeared in several of his novels.

The book, The Call of Cthulhu, tells the story of Cthulhu, an antique dragon-sea monster who had the power to slowly make people insane. Cultists worshipped it and would frequently offer sacrificial rituals.

Another impressive work by H.P. Lovecraft is the 1936 novel “The Shadow Over Innsmouth.” It tells the story of Robert Olmstead, a young man journeying to Innsmouth, a fictional town in Massachusetts.

Olmstead discovers that the town is under the authority of a dark cult. He began investigating and making findings and became a target of the cult for knowing too much.

While scholars applaud The Shadow Over Innsmouth is one of Lovecraft’s best works, it wasn’t one of the author’s favorites. However, it was his only published novel before he died – the rest published during his lifetime were short stories.

Lovecraft’s short stories that sparked controversy, like “The Rat in the Walls,” “The Dunwich Horror,” “Dagon,” and “The Whisperer in Darkness,” are also rated among his finest works.

Why Is H.P. Lovecraft So Important? 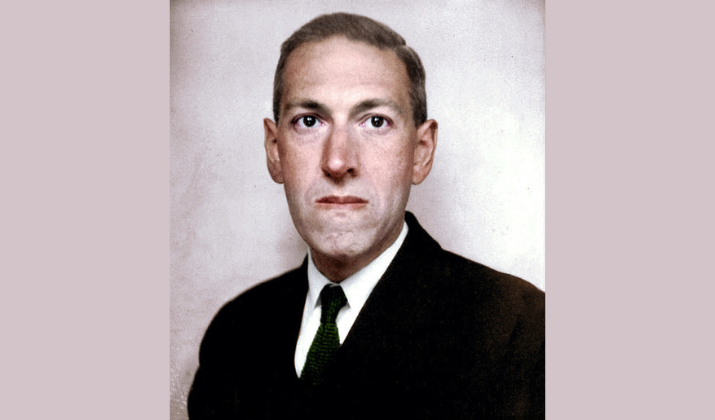 To many, H.P. Lovecraft is one of the most remarkable figures in horror fiction in history. In particular, he’s deemed the father of cosmic horror – also known as Lovecraftian horror.

Following the discovery of his works after his death, he became an influence on horror books, movies, and paintings, to name a few.

Many recent works are shaped by Lovecraft’s work. Some examples include Sherlock Holmes, which references Cthulhu and Lovecraft Country, and Stranger Things, which resembles Lovecraft’s 1920 short story, “From Beyond.”

Cthulhu was a monster in the horror film “Underwater (2020)” as confirmed by William Eubank, the movie’s director.

H.P. Lovecraft’s influence is visible in vast works of supernatural horror fiction. It’s untoward that he didn’t enjoy any of this fame when he was alive.

Many people question the sanity of H.P. Lovecraft due to his weird stories and ideologies. Furthermore, both his parents had mental problems.

When Lovecraft was three years old, his father, Winfield Scott Lovecraft, was admitted to the Butler Hospital, a mental institution, after suffering a nervous breakdown. He remained in the hospital for five years before he died.

His father was diagnosed with acute psychosis, although Lovecraft chose to believe a different story, that his father’s condition was due to overwork.

Lovecraft was close to his mother, Sarah “Suzie” Phillips Lovecraft while growing up. Unfortunately, she too was committed to the Butler Hospital in 1919 due to a mental illness.

Lovecraft was 29 years then, and the events led him into depression. In a 1934 letter, he described the period as the darkest of his life and that he contemplated committing suicide. For the following years, his life was miserable, especially during his time in New York.

While growing up, Lovecraft suffered near-breakdowns on multiple occasions that affected his schooling. He dropped out of high school shortly before graduation due to one such breakdown and never went back to school.

Overall, H.P. Lovecraft had health issues, but it’s unsure if it was mental, physical, or both.

The rave about H.P. Lovecraft cat memes began in 2018 on Tumblr. A user, greatpostsonline, on the “Black Lives Matter!!!” page commented on a picture of H.P. Lovecraft holding a cat.

In the comment, he referenced the cat’s name without mentioning it. A different user, robloxgf, commented, “what was his name,” and afterward, “oh no.”

Subsequently, another user, wynterroseskye, commented, “WHAT WAS HIS NAME?” And afterward, “OH NO!”

A third user, lostqueenofhoshido, commented, “What was the cat’s name?” And afterward, “Oh Oh dear.”

It would seem the users had Googled the name and were shocked by the result they found. The thread is currently one of the most popular on the page, with more than 206 thousand likes.

Screenshots of the comments went viral on other social media platforms as well. Soon after, everyone was asking about H.P. Lovecraft’s cat’s name and making memes of it.

Check out some other H.P. Lovecraft cat memes below: 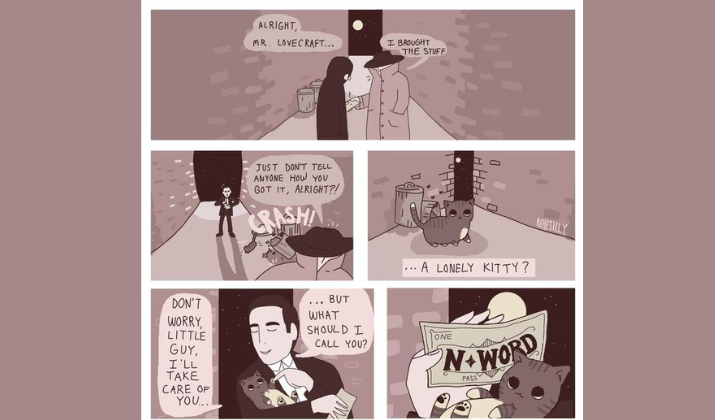 2. Do Not Google Lovecraft Cat Name 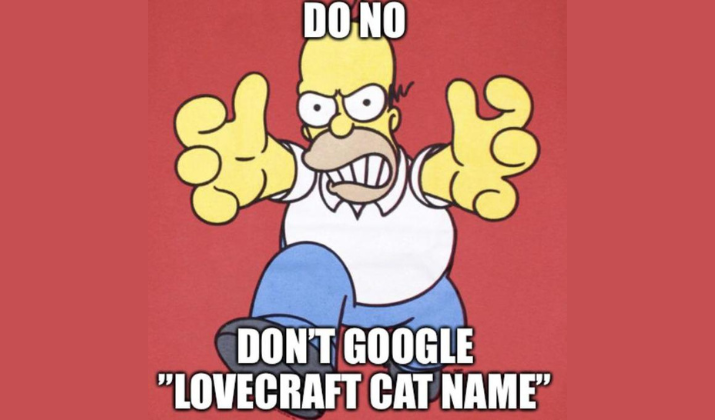 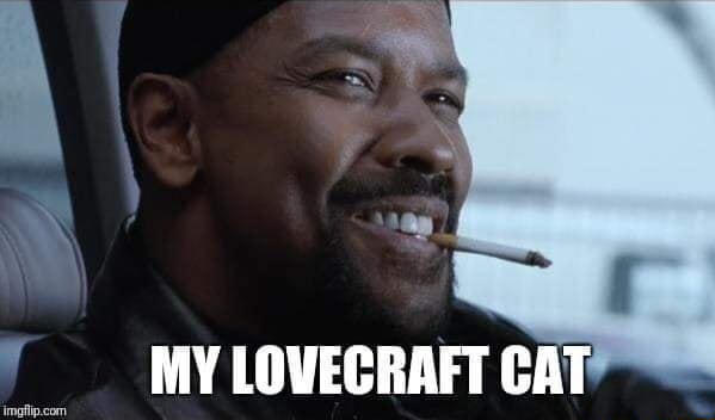 4. HP Lovecraft Has A Catgirl 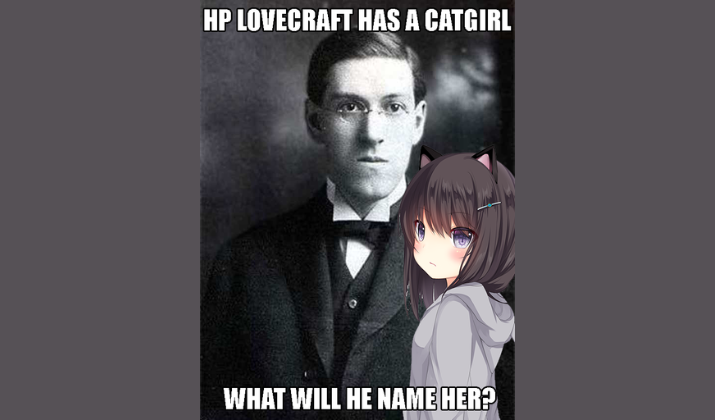 5. I Think He Really Likes Me, Mr. Lovecraft! 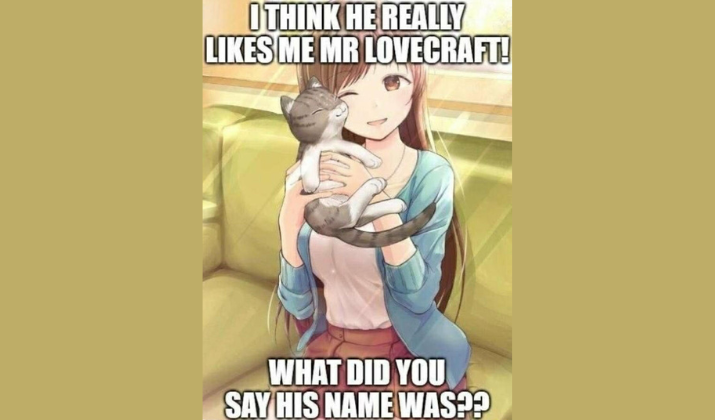 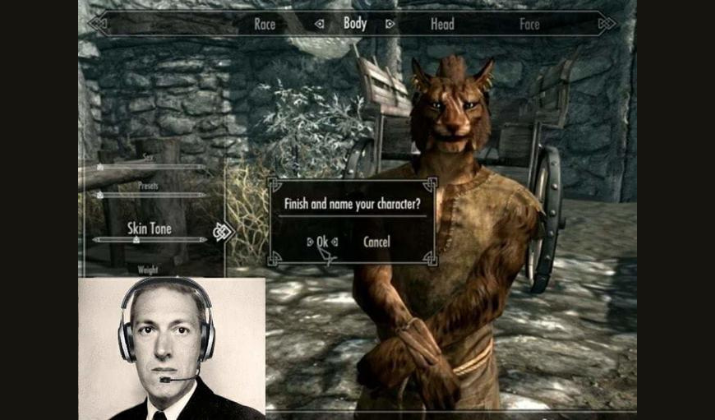 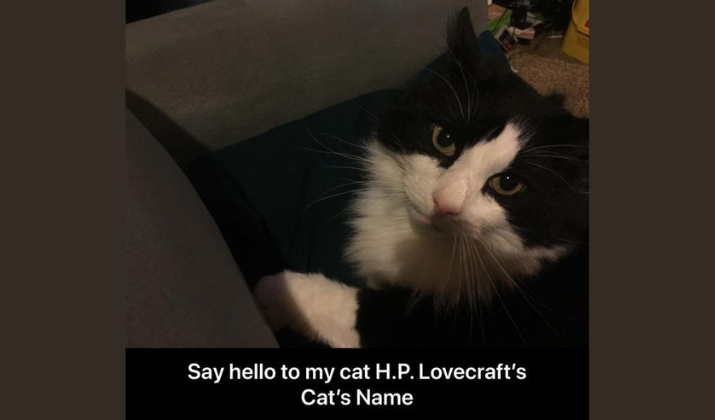 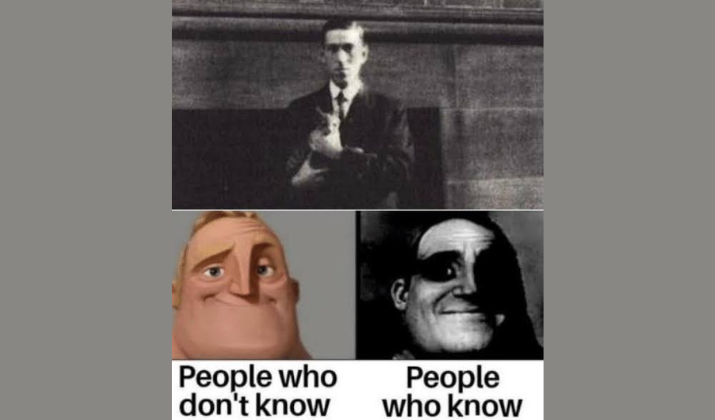 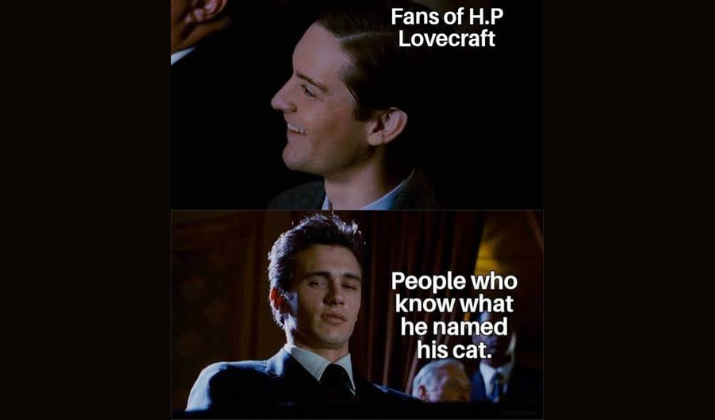 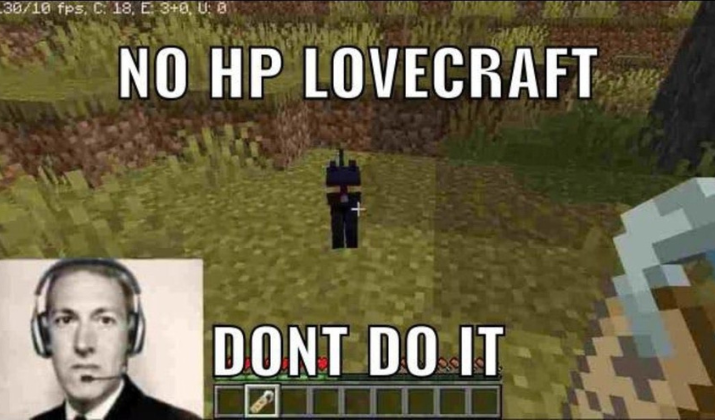 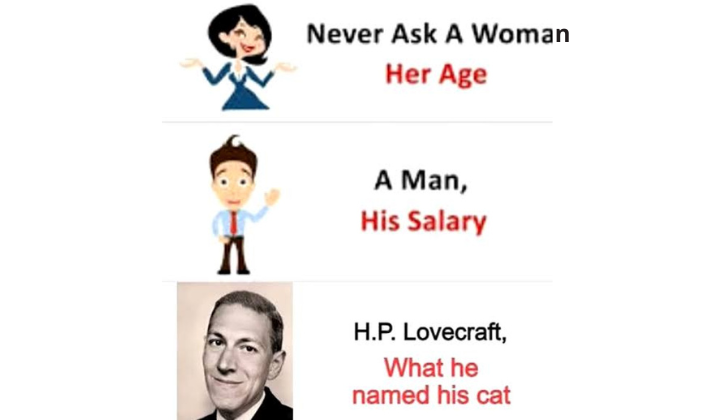 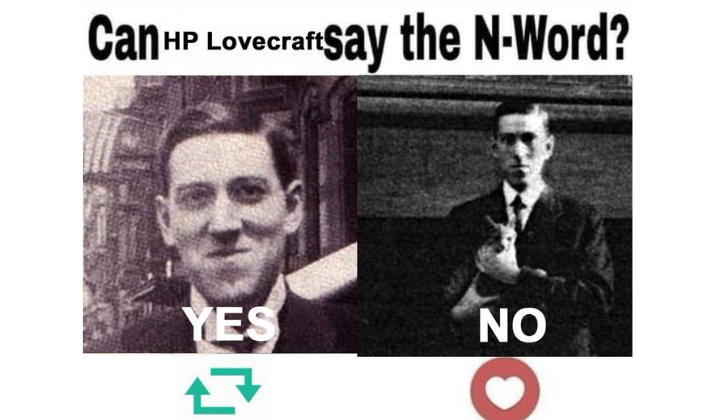 14. Lovecraft Looking At The Lady In The Red Dress 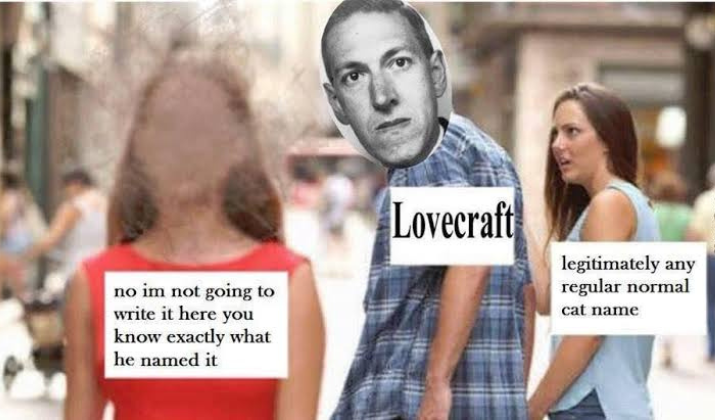 15. H.P. Lovecraft When Loses His Cat In Public 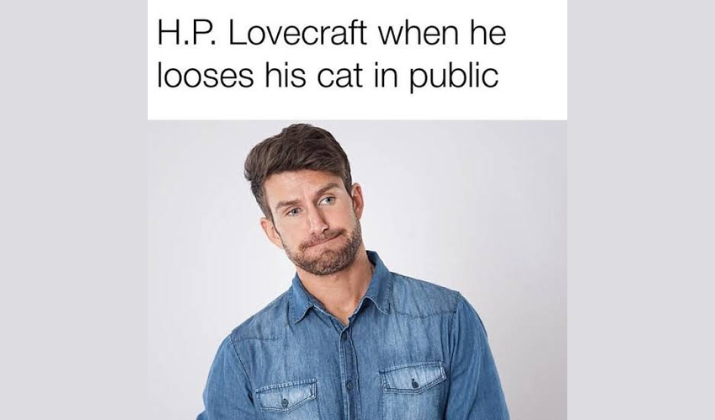 H.P. Lovecraft wrote some of the weirdest, yet most interesting and influential horror stories in history. However, not everyone remembers him for his work. Some people, especially the internet meme community, remember him for the infamous name of his cat.

Although the memes are meant to be fun, it’s important to note that they subsume a sensitive topic – racism. As a result, they should be used sparingly and even then in an ethical context.